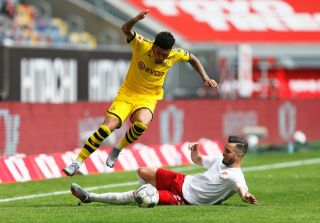 This summer Manchester United could be involved in the biggest transfer to happen.

The former Manchester City winger has been on fire in the Bundesliga this season, scoring 17 goals and providing a further 17 assists in 29 games (via Transfermarkt).

That is why Ole Gunnar Solskjaer wants to take Sancho to Old Trafford and give the Reds a different threat in attack from the right flank. With Marcus Rashford operating on the left and potentially Sancho on the left, full-backs will be under severe pressure to keep United at bay!

Dortmund manager Lucien Favre has now given hope to United that a deal is possible.

“Of course, they could stay with us, which would be very good for me. But we’ll see what we’ll do, whether it’s in defence, midfield or attack.”

Although he doesn’t directly talk about the Sancho rumours specifically, it is clear as the manager of a selling club he doesn’t know what will happen if Dortmund are offered a large sum of money for either player.

Solskjaer is trying to build his United team to be successful and fighting on all fronts, so he needs someone of higher calibre on the right flank. A real goal threat.

Sancho is a player who I’d like to see in Red but Dortmund appear to be playing hard ball — and unlike previous summers they are not in a position that they need to sell their top players.

But if they do sell Sancho this summer, I’m sure they will have replacements lined up as per usual.

READ MORE: United youngster fires back at critics over his religious practices