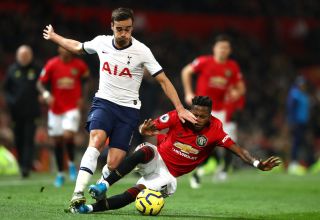 Manchester United fans have expressed their concern over the referee for Friday evening’s crucial clash against Tottenham on Friday evening.

The officials ahead of the first week of the Premier League restart have been confirmed, with Jonathan Moss named as referee and Graham Scott as Video Assistant for United’s fixture.

United must resume with a win against Jose Mourinho’s Spurs at the new White Heart Lane as they look to reignite their momentum from the 11-game unbeaten run before the enforced break.

Ole Gunnar Solskjaer will have a full complement of players to choose from in his squad, with key men Marcus Rashford and Paul Pogba using football’s hiatus to recover to full fitness.

The introduction of the rule which allows five substitutions should benefit Solskjaer, who can utilise his squad depth to hurt a tiring Tottenham defence.

Football fans have good memories when it comes to refereeing decisions, and obviously love to suggest that the one put in charge of their game is biased towards the opposition.

But we hope the match on Friday is not settled by a controversial call, rather an accomplished performance from a superior United side.

Meanwhile, it has also been confirmed that Mike Dean will referee the Merseyside derby between Everton and Liverpool and Anthony Taylor will take charge of Manchester City v Arsenal on Gameweek 30.

He’s literally the worst ref in the league

Johnathan Moss will officiate the Manchester United vs Spurs game on Friday.

I hate that man because he always against us on the pitch.

I don’t like that referee, he’s so biased against us. Wasn’t he the one who sent Matic off in our second leg EFL cup game against City, we would have scored more and gone to the finals to win the cup against Aston Villa