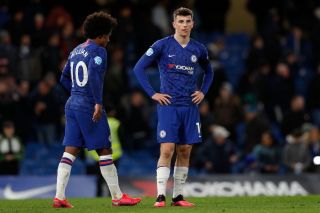 The Brazilian’s contract at Stamford Bridge expires at the end of this month and United are said to have registered an interest in signing him on a free transfer.

According to FranceFootball, Chelsea are reluctant to meet Willian’s demands of a new three-year deal and United have reached out to his agent Kia Joorabchian sounding out a possible move to Old Trafford.

If United do want to sign Willian they would likely face stiff competition with Real Madrid and Paris Saint-Germain also credited with an interest in the report.

He could be an attractive option for manager Ole Gunnar Solskjaer given his Premier League experience and the fact there would be no transfer fee.

Willian has established himself as one of the most accomplished forwards in the league during his six seasons in West London and would be a short-term solution to United’s problem position on the right-flank.

But Solskjaer is focusing his rebuild around young, exciting talent and at 31,  Willian is not the type of player the Norwegian could build his squad around.

United should have learned from their mistakes in offering a lucrative contract to an ageing winger with the transfer of Alexis Sanchez failing dramatically.

As noted by the Evening Standard, Borussia Dortmund starlet Jadon Sancho is still United’s priority transfer target this summer and we retain some hope that the club can pull off a deal for the 20-year-old despite the financial crisis faced during the coronavirus pandemic.