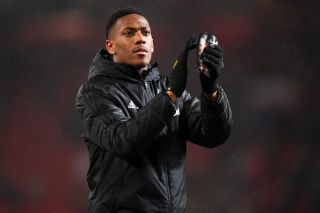 Manchester United striker Anthony Martial is on the verge of completing a 20-goal season target for the first time since he joined the Reds.

Martial, 24, was currently enduring his finest season to date prior to COVID-19 suspension and is just one goal away from matching his best ever goal tally (17).

The Frenchman’s overall game has undoubtedly improved under boss Ole Gunner Solskjaer. The striker’s hold-up player and willingness to always be an offensive outlet has been a constant source of threat for United.

As originally reported by Manchester Evening News, during a post-match press conference back in February this year, Solskjaer stated his 20-goal season hopes for his number nine.

Martial’s 14th of the season came against Club Brugge in the Europa League during a 1-1 draw which prompted Solskjaer to say: ”I think Anthony can step up, get a few more and get to the 20 mark, definitely. He’s got quality of course, he’s a very good finisher. He takes his chances really well.”

Now, with nine domestic games left and another possible three in the FA Cup, Martial and his boss Solskjaer will be eyeing the elusive 20-goal mark.

Should the exciting striker manage to solidify his goal scoring prowess, Solskjaer will be forced to question whether or not seeking out an additional striker is such a priority.

United’s first game back after the league’s postponement is an away tie against under pressure Spurs on June 19.