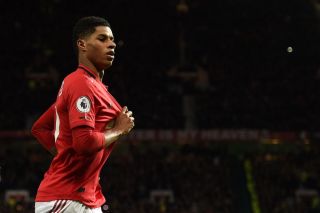 His efforts off the pitch during this pandemic have been remarkable. The Manchester born striker is a credit to Manchester United.

Now Rashford has said he would fight on after the government confirmed it would not provide free school meal vouchers during the summer. He sent an emotionally written letter to MPs in which he said “the system isn’t built like mine to succeed.”

Rashford also tweeted “we aren’t beaten yet” and “MPs, please #maketheUturn” when it became public knowledge that the Department for Education said it would reverse its decision.

We aren’t beaten yet, stand strong for the 200,000 children who haven’t had a meal to eat today and keep retweeting 🗣 #maketheUturn

The United forward has raised about £20m to supply three million meals to vulnerable people during the pandemic, whilst working on behalf of charity FareShare UK.

In the letter, Rashford shines a light on how he relied on free school meals and food banks growing up, which explains why he is taking this so seriously and showing a great degree of humbleness.

Speaking to BBC Breakfast, he said: “It’s written from the heart and it’s about how my life was at the moment — the letter is to open up and let people understand the impact on families and to know I’ve done the right thing.

“What families aren going through now, I’ve once had to go through that — and it’s very difficult to find a way out. It’s very important for me to help people who are struggling — whether the outcome changes or doesn’t change, that’s why I wrote it.”

Prior to his injury this season, Rashford was showing signs of becoming a leader on the pitch for United. This pandemic has shown he’s one off the pitch for society, which is arguably more significant in the grand scheme of things.

The young people of Manchester have a voice in Rashford. Rather interestingly, Gary Neville admitted in an interview with The Guardian that he regrets not doing more in his playing career to tackle racism. And the former United captain is calling for change in the game.