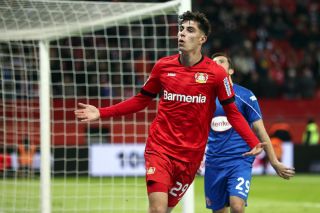 According to Telegraph, Bayern Munich now the firm favourites to secure the signature of highly-rated attacking midfielder, Kai Havertz.

Havertz, 21, is thought to be the top summer priority for Bayern Munich — along with Manchester City’s Leroy Sane.

The soon-to-be 30 times German Champions are believed to be determined to land both Sane and Havertz in what will be a new-look Bayern Munich side built with young German talent as their foundation.

Manchester United have been among a whole host of top European sides linked to Havertz, with the list of potential suitors also including the likes of Real Madrid and Chelsea. The Daily Star ran a report last week suggesting United had already made contact with the Germany international ‘weeks ago’.

However, it is now understood that Bayern Munich have cemented themselves as front runners to secure the talented attacker. The Bundesliga title leaders are believed to open discussions for a potential £75mil transfer fee, a sum which better matches Bayer Leverkusen’s valuation of their star man.

It will be interesting to see how United act in the market if their main target is Jadon Sancho, as per The Independent, because it’s hard to imagine Ole Gunnar Solskjaer going for both of these Bundesliga stars in the same transfer window.