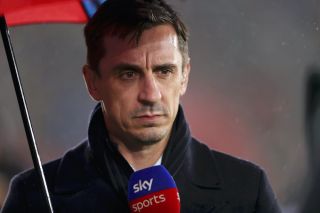 Former Manchester United defender wants structural change and has revealed that he is ashamed he did not stick up for Ashley Cole in 2004.

“Forget campaigns. Forget words. It has to be actions,” Neville told The Guardian. “It has to be demonstrative, it has to be real and happen. We need to take a giant leap rather than minute steps each year. We know the obvious discrimination, the obvious abuse — it’s easy for us to see that — but we need to talk about equal representation in boardrooms, on the coaching side up and down this country.

“I’m not going to hide away from it. We need education, we need protocols and processes in place which basically reverse what’s been happening in our country.”

There is some regret on Neville’s behalf when he admits to being left ashamed he had not done more to confront racial abuse during his playing career. This, I would argue, shows some progress resulting from more people talking out against racism — though those that suffer from it have been echoing the same sentiments for as long as I can remember.

Neville notes that he did not stick up for fellow former England international Ashley Cole when he was abused by Spanish fans at the Bernabéu.

“The reality is we put racial abuse in the same category as the abuse we would receive for playing for Manchester United or England. We didn’t think. We just got on with it. It’s appalling and I’m ashamed of the fact for someone who was on the PFA management committee and fought for players’ rights at nearly every level, I didn’t fight hard enough on this.

“I didn’t demonstrate anything and it’s not good enough. It’s not me. But what we’ve seen in the last few weeks has been enlightening. I felt warm and tingly watching the protests. The passion, the feeling, the intensity of it.”

Sky asked Troy Townsend of Kick It Out to speak to its pundits and presenters about racism — to ensure they are educated on the matter, if certain members have been living under a rock. But that’s what all media outlets should be doing — rather than running stories that scapegoat a lot of black players.

“The idea of having a Kick It Out t-shirt on once a season as a football player doing a picture in front of a flat and then going training and basically not seeing it again for another 12 months is not enough. It feels like there needs to be a huge change not just in football but in society in these few months.”

Neville also pushes for change to benefit England’s football pyramid — as one of Salford City’s owners he has a greater perspective on the struggles lower league clubs face amidst the coronavirus pandemic.

“I would hope football uses this as a chance to reset — reset the pyramid, distribute the wealth more, give grassroots more and give the lower league clubs more. Make ourselves still the best league in the world but make it more affordable for fans to get into a stadium, make it more accessible, all the things that we know are right.

I wouldn’t think the Glazers are in the same boat, Gary.

READ MORE: Report: Solskjaer not looking to rush Pogba back into starting line-up against Tottenham 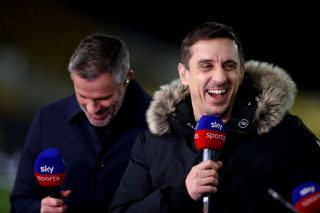