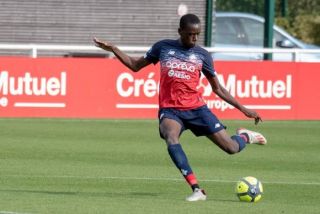 Manchester United and fellow Premier League rivals Everton could be set to battle it out in the race to sign French youngster Joel Ngoya.

Ngoya, 18, is currently on a youth contract with French side, Lille, and is believed to be considering his options as a host of European heavyweights ponder a move for the talented midfielder.

As reported by France Football, Ngoya had expected to be offered a professional contract by Lille, however, that has yet to happen, prompting him to consider a move away from the Ligue 1 outfit.

It is believed that representatives of the youngster have contacted both United and Everton regarding a possible move.

However, with interest also coming from the likes of Valencia, Lyon and Atletico Madrid to name just a few, it is clear the youthful midfielder’s services are high in demand.

France Football add that front runners at this early stage are Olympique de Marseille, who are expected to submit a formal bid in the coming days.

Should Manchester United be tempted by Ngoya, they will need to act quickly and efficiently in order to secure a deal.