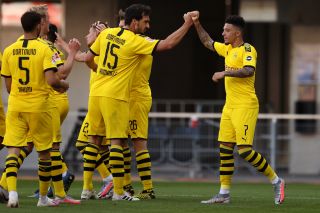 In an exclusive interview with Goal, ex-Manchester United striker Louis Saha highlighted why he believes his former club should break the bank for Borussia Dortmund’s wonderkid Jadon Sancho.

Sancho, 20 has been widely tipped to leave the Black and Yellows this summer in a deal which could see the British transfer record smashed.

The exciting wide-man has featured 29 times domestically for his club, scoring a highly impressive 17 goals and providing a further 16.

The youthful attacker now has a monumental total of 33 goal contributions to his name, a stat which ranks him among the top 20 attackers in Europe.

Saha is the latest big name to weigh-in on the links between his old club and Sancho.

During a recent interview with Goal, he explained how Sancho is the complete forward with his superb blend of pace and flair.

“He [Jadon Sancho] is uncatchable, he’s clever, quick and very precise. He’s got the legs, the stamina and the quality. He’s very creative for that type of player,” Saha said.

Addressing how deadly Saha believes Sancho can be, he went onto say: “When you have all those things, like I said about speed and creativity, but precision as well, so imagine how deadly these things are.

“You can’t stop the guy and at the same time he is very precise because he knows how to stop when passing the ball. It’s really hard because players, for example, Anthony [Martial] and Marcus [Rashford], it can be hard for them because most of the time they’re running so quick making it hard to deliver a good pass like [Juan] Mata would do.

“So, Sancho has the ability to address the right passes, the right weight of passes because of his intelligence.”

Manchester United have appeared to be leading the race to secure the young, English winger, however, in a recent report by German outlet Kicker, United have yet to officially approach Dortmund regarding a possible transfer for Sancho.