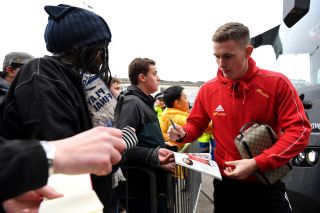 Manchester United goalkeeper Dean Henderson is set to see his loan move with Sheffield United extended for the remainder of this season.

Sheffield United boss Chris Wilder has confirmed the loan extension is close to being finalised between both Premier League clubs, as per The Independent.

Henderson, 23, has been on loan with the Blades since the summer of 2018, although his latest spell has undoubtedly been his most impressive since it’s his first in the top-flight.

The young English goalkeeper has started all but one domestic game for his adopted side, with the exception being against parent club, United. The impressive nature of Henderson’s campaign has seen him keep a highly respectable 10 clean sheets, a stat which has helped guide new-boys Sheffield United to seventh in the Premier League table.

Wilder has now confirmed that his side are set to keep the talented youngster for at least the remainder of this season.

Wilder said: “I spoke to Ole [Gunnar Solskjaer] yesterday morning, I thanked him for his co-operation with Dean and we are in the process, in the next couple of days, of finalising Dean’s stay with us until the end of the season.

“Their manager was brilliant and was very pro to Dean staying and delighted in terms of what Dean has produced for us and what we have done for Dean as well. That can’t go unmissed.

“We have had initial, early conversations [about him coming back next season]. Of course we would be open to Dean coming back, but I have got huge respect for Manchester United.

“I have always gone on record as saying he is a Manchester United player and they will make the decision based on what is best for themselves and for Dean. If there is an opportunity we would love to take that up.”

With this latest development, Henderson is now expected to feature for the Blades in what will be the first Premier League game to be played post COVID-19 suspension against relegation threatened Aston Villa.