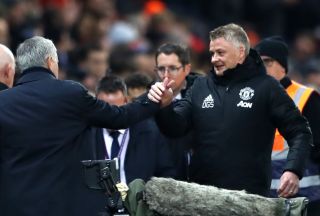 Manchester United’s Premier League return against Tottenham Hotspur was thrown into doubt on Friday night after it was confirmed a Norwich City player had tested positive for coronavirus.

The Norwich player had taken part in a friendly match against Jose Mourinho’s side on Friday and will now self isolate for seven days under government guidelines before being tested again.

The player has not been named, but was one of two positive COVID-19 tests from 1200 checks ahead of the Premier League restart next week.

Many assumed that the positive test would mean that the Tottenham players that shared the same pitch would also have to self isolate, putting the United fixture in jeopardy.

However, it has now been explained that Spurs players will not have to quarantine themselves due to the positive test of the opposition player and that the game next Friday evening will still go ahead.

This is because the Norwich player was not within two metres of Tottenham players for 15 minutes or more.

A Tottenham statement, as quoted by the Evening Standard, read:

“We continue to operate within the strict guidelines outlined by the Premier League to ensure we avoid any risk of infection spreading should anyone else test positive, including practising social distancing so no ‘close contacts’ are created, which has been defined by Government as being within two metres of a confirmed case for 15 minutes or more.

“This means that no other member of the squad or staff should be forced to self-isolate other than the person who returns a positive test result and their household members.

“The Norwich player in question has confirmed he had no ‘close contacts’ with our team yesterday and our squad has also verified this.

“Our testing has continued to return only negative results for Covid since one positive reading was confirmed almost two weeks ago.”

This is bound to cause confusion amongst the wider public who have been under the assumption they cannot be within two metres of anyone that could have the coronavirus for any length of time.

We perhaps need more government clarity in the UK as many could now believe they can spend up to 15 minutes with another person without social distancing and avoid the risk of spreading COVID-19.

Sky Sports News reporter @MissEmmaPaton explains why Tottenham players will not have to self-isolate despite playing against a Norwich player who tested positive for coronavirus on Friday. pic.twitter.com/11OluHGCnv