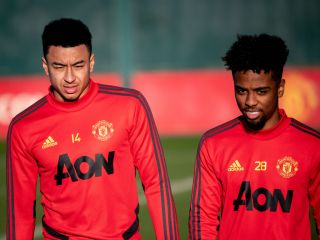 Angel Gomes’ contract at Manchester United expires at the end of this month and we are still no closer to knowing where his long-term future lies.

The 19-year-old has been starved of first-team game time this season, making just three starts under Ole Gunnar Solskjaer that all came in the Europa League group stages.

Gomes has been linked with a host of clubs with his contract situation uncertain, but the Manchester Evening News has provided a useful update on the club’s stance on diminutive playmaker.

The MEN report that an offer still remains on the table for Gomes, with United keen to secure the long-term future of a player that they still regard extremely highly.

It is believed there has been no negotiations concerning an extension beyond June 30 when his contract expires which means he could leave before the end of the season if a deal is not reached.

Therefore, Gomes has two weeks to decide whether he wants to remain at Old Trafford and fight for his place, with the ball firmly in the talented teenager’s court.

Perhaps Gomes still needs convincing that there will be a first-team path offered to Gomes amid the plethora of attacking options currently ahead of him in Solskjaer’s pecking order.

However, it is encouraging that he made a return to training and featured in the friendly against West Brom at Old Trafford as Solskjaer prepares for next week’s Premier League resumption against Tottenham.

Ideally, we would love to see Gomes commit his long-term future to United before being granted a season-long loan where he can have the chance to flourish in first-team football before returning and competing for a starting berth.

READ MORE: Why Man Utd v Tottenham is not under threat despite positive COVID-19 test