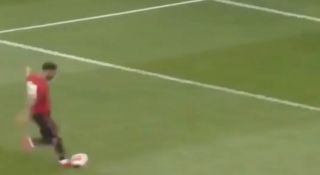 Bruno Fernandes scored from the spot in yesterday’s friendly match against West Brom.

The Portuguese Magnifico played alongside Paul Pogba in centre-midfield and we’ve seen glimpses of the duo linking up together on the pitch. There’s a lot of excitement around that with the return of the Premier League and United shouldn’t be struggling to find a creative spark in games anymore.

Fernandes put away his penalty against the Baggies rather calmly as you’d expect a professional football to do in an empty stadium.

There won’t be the same pressure in these games but I wonder if Paul Pogba will register his hand when it comes to a penalty in the more competitive games.