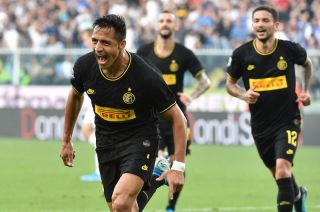 Most Manchester United fans have given up hope on Alexis Sanchez. You can definitely label him a flop.

The Chile international joined the Red Devils in January 2018, with Armenian midfielder Henrikh Mkhitaryan going the opposite way to Arsenal. There was a lot of excitement surrounding José Mourinho’s signing but he ultimately flopped.

Shifting Sanchez will prove to be difficult for United, though.

He’s hardly set Serie A to light during his time at Inter Milan and I would be very surprised if Antonio Conte wanted to take him off our wage books this summer.

That hasn’t stopped former Inter striker Samuel Eto’o from airing his views that Sanchez possess the “different skills” that will allow him to make a different at San Siro.

“Alexis has been unlucky this season because of that injury,” Eto’o told Chilean outlet CDF Noticias. “But the quality he has is not up for discussion.

“He is a player who can make a difference at all times. He is a different attacker, with his movement, and he is lethal one-on-one.

“It’s normal that it takes time for him to get back to his best. He arrived at Inter following a period without playing much at United.

Convinced? Nah, me neither…

Having previously established himself in Italy with Udinese — and Barcelona in La Liga — the South American was offered a clean slate by Conte and the Nerazzurri.

Form and fitness continue to drag him down in Italy, like what happened during his time in Manchester and you won’t know many United fans who want him back next season.