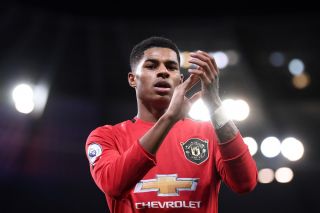 Rashford has become Ole Gunnar Solskjaer’s talisman this season, scoring 18 goals in all competitions before suffering a double stress fracture in his back in January.

He has since used the enforced break from football to get back to full fitness and is raring to go ahead of United’s restart against Tottenham Hotspur next Friday.

Saha, who spent four seasons with United under Sir Alex Ferguson, believes we are starting to see signs that Rashford is one of Solskjaer’s new leaders.

“Yes, I think the attitude, the drive, the actual consistency, all those things are leadership qualities,” Saha told Stats Perform News.

“You said that sometimes it’s really hard for a striker to lead and, if you do, you need that. You need those three: consistency, drive, and, of course, talent.

“What is very important is having that dedication to actually look around and grab someone who needs to be grabbed and shout at them. All those things are essential.

“They don’t have that platform as much as I had when I was playing. I had Roy Keane, Phil Neville, Gary Neville, Rio [Ferdinand], Nemanja Vidic, Patrice Evra, [Paul] Scholes, [Ryan] Giggs, all those players. You could rely on those guys.

“There are definitely four or five players who are very important to Ole Gunnar Solskjaer. I would say that, based on [his] record, he is not young anymore, almost because he started really young.

“He’s one of the starters for England. And Rashford, as much as we can compare to Anthony [Martial] has done the same.

“The attitude… I’m not saying they had a bad attitude; they had the attitude that was in line with what Manchester United needed at the time.

“Maybe this attitude was okay when you had leaders around like proper players who win trophies and all that, and it was fine. Maybe I was like this at the time, but I had players to do what I can’t do. I had to actually evolve and be a leader.

“When I spoke to Scott McTominay, he was young as well, he had to do it. All those players who made that improvement process for Ole Gunnar Solskjaer were very important, and I think for Rashford, the introduction of [Harry] Maguire was important to give that kind of confidence aspect.

“That’s why you give the platform for Rashford to make the difference all the time because he can do it because his work rate is amazing and that thing he maybe missed in one year because maybe he thought ‘I’ve got my position, I’m respected, I’ve got my status so I don’t need to do this or that’.

“Those things can be a bad sign for those playing behind you. Now you can see he is a proper leader.”

While he has shone on the pitch, what has been most important is the way Rashford has used his platform to provide for others during the coronavirus crisis.

The England international has been a beacon on light during these dark times, offering hope and faith with his generous support and charity work.

Rashford revealed on Thursday evening that FareShareUK, a charity he has teamed up with, has raised enough money to supply three million meals to the most vulnerable children across the UK.

He has helped raise about £20m for the charity but insists there is so much more work to do for a cause that is very close to his heart.

At just 22-years-old, Rashford has become a role model for youngsters to look towards, and should be proud of his impact during this lockdown period.

And whilst I’m celebrating this, there is SO much more to do. Trust me when I say, I will keep fighting until no child in the UK has to worry about where their next meal is coming from. This is England in 2020 and families need help (2)