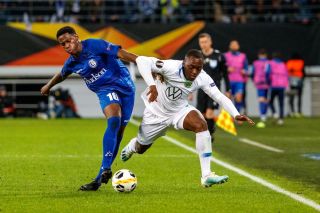 Manchester United are reportedly looking to add to their strikers department despite agreeing on a loan extension to keep Odion Ighalo at the club until January 2021.

According to HLN, United have held informal talks for potentially signing Gent forward Jonathan David. The young goalscorer has been brilliant this season scoring 23 goals and registering 10 assists for the Belgian side.

This is not the first time the Red Devils have been linked with a move for David this season. United were said to be monitoring the 20-year-old Canada international in February, as per the Mail, and he shares the same nickname as centre-back Victor Lindelof: ‘Iceman’.

The report in question from HLN states United haven’t made any offers for David and only spoke to his agent Nick Mavromaras.

It does, however, outline that Gent want around £23m for their main scoring threat.

Even if it turns out to be true, that United have reached out to David’s agent, HLN say the very same about Arsenal so there will likely be competition for his signature.

“I want to become one of the best strikers in the world and most competitive so obviously that is somewhere I would love to play in the future,” David told The Guardian when he expressed his desire to move to the Premier League.

“The Premier League is the best in the world and most competitive so obviously that is somewhere I would love to play in the future.”

Of all our targets in Solskjaer’s quest to find a goalscorer we’ll be keeping a close eye on this one.