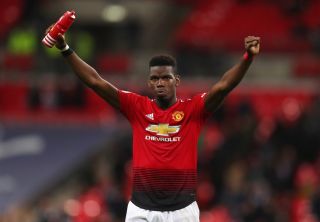 Louis Saha claims he has chatted to Paul Pogba over the phone and believes the midfielder can excel now in midfield with Bruno Fernandes.

Pogba has yet to play with the January arrival due to injury but there’s a good chance both players will start next week away to Tottenham Hotspur as the Premier League returns.

And Saha thinks Pogba is ready to ‘shut down the critics’ when he returns to action, despite not making an appearance for Ole Gunnar Solskjaer’s side since Boxing Day.

Moreover, he had surgery on his ankle in January so the manager may try to ease him back into the team.

‘He’s one of the best players in the world. He had a tough season plagued by injuries. He came back very motivated, that’s what some of the players told me,’ Saha told Stats Perform News (via GOAL).

‘When I talk to him on the phone, he’s super motivated, so I really want to see not a new Pogba, but Pogba with support. I don’t think he was supported. Now he has Bruno Fernandes next to him, who’s another leader, another creator.’

Saha, who won two Premier League titles at United, adds that the Red Devils will benefit from having another creative spark in the team.

‘I’m really excited about that sharing of the responsibilities, I really want to watch that team.

‘He’s very motivated, he’s incredibly talented, he already proved himself, but now he has a better platform to improve and shut down the critics, sometimes justified.’

At leash Saha doesn’t try let on that none of the criticism Pogba gets is justified. That’s an important realisation we need to accept when sharing our views on the Frenchman.

If he can come back and reach the levels we know he can, United fans will be very happy again, but if he doesn’t the fans will want him out.

READ MORE: The Cup Winners Cup – a forgotten tournament in the heart of United