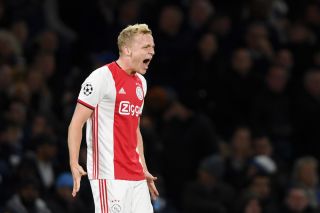 United legend Edwin van der Sar confirmed United’s interest in Van de Beek earlier this week, but also named La Liga giants Real Madrid, so there will be some competition for his signature this summer.

Over in Madrid, Zinedine Zidane will be looking to inject some youth into his side with current midfield options Luka Madrid and Toni Kroos ageing, but the Mail suggests United will hijack their £49m deal for Van de Beek.

“When you hear these clubs pass by, I know your heart will beat faster,” De Boer told FOX Sports (via Metro).

“Maybe this train will never pass by anymore for him.

“If Real Madrid again decided not to report themselves at Donny, then I can understand if he decides to go to Manchester United instead.

“One the one hand, I understand that Real Madrid are hesitating a bit.

“Another club could think, ‘hey, an interesting player, maybe we can get him for a little less.’ For example Manchester United.” 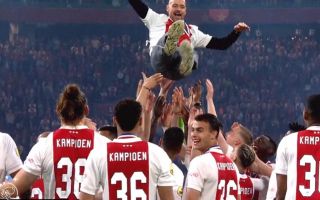 He believe the 23-year-old is the sort of player Solskjaer wants.

“Solskjaer has indicated that he wants to go in a new direction and wants players who are humble, their heart is with the club, a team player,” De Boer added.

“I think he is tired of the Pogbas running around. He wants players like Donny van de Beek.”