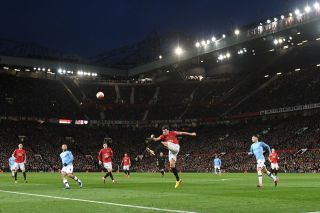 Manchester United have announced plans to create an atmosphere at Old Trafford ahead of the Premier League’s restart next week.

Clubs are being faced with an unenviable task of attempting to manufacture a better atmosphere for supporters in games that will all be played behind in empty stadiums.

Plans have been discussed between the top flight clubs and broadcasters to enhance the viewing spectacle with all remaining Premier League games available to watch on television. Artificial crowd noises are expected to be an option that is used.

As reported by the Evening Standard, United have also been working hard in findings their own ways to boost the spectacle of their home games for their global support as well as players on the pitch. It is believed the club have been open to any suggestions from staff and have decided on a large mosaic to replace real fans.

The mosaic should be ready in time for United’s first home game after the restart against Sheffield United, and will comprise of photos fans have sent in of themselves via their official app.

“We know that nothing can replace the roar of the Old Trafford crowd as a packed stadium filled with thousands of Reds gets behind the team,” United’s statement read.

“We’ll still be working to make an empty Old Trafford look amazing for the team and for the millions watching at home, including an incredible mosaic image featuring our loyal fans.

“We’ll use the images to create a mosaic of our fans from across the globe to inspire the players during our home matches until real crowds return.

The image will then be stored at our museum, to remember this unprecedented time when football had to temporarily be without the fans that make it so special.”

We understand it will be almost impossible to generate any kind of atmosphere within stadiums as sport behind closed doors is unfortunately often soulless.

But it’s encouraging to hear the club are doing everything they can to improve the experience for viewers during this unprecedented time.