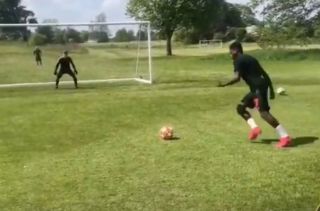 Bruno Fernandes and Fred appear to be extra training away from Carrington in order to be ready for next week as the Premier League resumes.

Teaming up with RH Elite Coaching, the Manchester United pair are on video as Fred attempts a spot kick.

I don’t recall seeing Fred taking many penalties since joining United but it’s good to see he can put them away and into the onion bag.

Meanwhile, Fernandes was doing his best to put his teammate off as he ran towards the ball and struck home.

It didn’t faze the Brazilian but Fernandes was just getting him ready for an FA Cup or Europa League final! 😉

Bruno putting off Fred during a penalty from r/reddevils

It’s clear from the above clip that Fernandes needs to work harder when it comes to putting off Fred, but the latter seems to be working on his finishing which is great because he it would be of massive benefit to United if he could start getting into better positions to adding to the scoresheet.