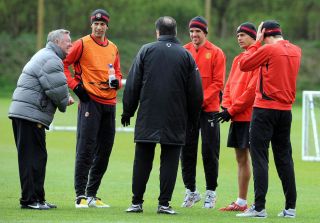 Former Manchester United midfielder Owen Hargreaves has recalled how players came close to blows on the even of their 2008 Champions League win.

The Reds would see off Premier League rivals Chelsea 6-5 on penalties in what was a tense affair in Moscow.

But beforehand it wasn’t too different for the victorious side.

Hargreaves, who scored his penalty in the shootout at the Luzhniki Stadium, revealed the manager had to step in to stop a fight breaking out.

None of the players were named but Hargreaves told beIN Sport that the whole squad was fired up and ready for the showdown.

“I remember we did a training game in the stadium in Moscow the day before and we almost had a fight amongst the two teams because the training game was so intense,” the ex-United midfielder said.

“One team lost and everybody was moaning at each other and Sir Alex had to come in and break it up. That’s how it was. Everyone was so competitive about winning.”

There was no holding back in training and even before a Champions League final they were playing without fear of getting injured.