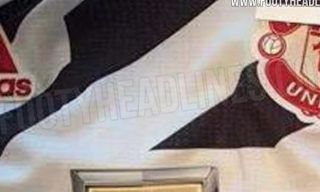 New pictures are circulating of Manchester United’s third jersey for 2020-21.

The apparent Adidas leak is set to introduce a ‘dazzle camo’ look which is different to any shirt I’ve seen manufactured for the club.

It looks like it will display a dazzle camouflage all-over print in white and black, like a zebra of some sort.

I don’t get excited about kit releases like when I was a kid. That’s the way it should be, right?

It’s not worth getting excited over leaks. They might even appear online but until it’s confirmed by the club you are best waiting for an official release.

One observation I have from looking at the pictures below (via Footy Headlines – who are pretty reliable when it comes to kit leaks) is the Chevrolet logo is less ‘in your face’ than it is on more plain shirts.

I still won’t be buying it though.

READ MORE: What Man United have done to boost Old Trafford atmosphere with no fans