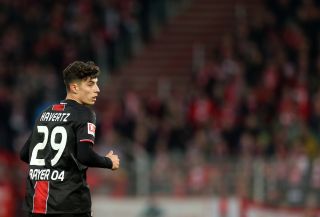 Kai Havertz is not short of potential suitors if he chooses to leave Bayer Leverkusen this summer.

The German international has been stealing the headlines since the Bundesliga returned in mid-May and his performances this season have earned European recognition.

Havertz is a versatile forward that can operate across the front three or in behind a striker. He has scored 15 goals in all competitions for Leverkusen this term and laid on a further seven assists.

Manchester United are one of the clubs said to be interested in the youngster and the Manchester Evening News have reported that Ole Gunnar Solskjaer is monitoring his future.

United’s interest in Havertz is hardly surprising given he is one of the most talented attacking players across Europe right now. But if they do pursue a move for the 21-year-old, they will likely face stiff competition.

ESPN claim Chelsea may turn their attention to Havertz in the event they miss out Borussia Dortmund star Jadon Sancho who they fear could join United this summer.

The London club are already closing in on the signing of prolific RB Leipzig forward Timo Werner and Havertz could take Frank Lampard’s attack to the next level.

Reputable Bundesliga journalist Christian Falk has clarified on twitter that Havertz can see himself playing in the blue of Chelsea and there have already been talks between the two clubs.

But he also suggested United, Real Madrid, Barcelona, Bayern Munich, and surprisingly Newcastle, who are nearing their Saudi takeover, are not out of the running to sign him.

We will keep a close eye on developments concerning Havertz’s future this summer as there still remains a realistic possibility that he could move to Old Trafford.

Because of many requests. True: Kai Havertz can imagine to play for @ChelseaFC. True: there are already talks. But: @ChelseaFC is not the one and only Club for Havertz @realmadrid @FCBarcelona @ManUtd @FCBayern @NUFC