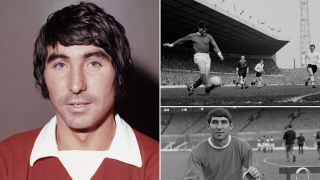 In the great Manchester United team of 1965-1968, there were many celebrated footballers. Three Ballon d’Or winners, two World Cup winners, all-time appearance record holders, and of course, three of the greatest footballers to ever grace the domestic game in England in the trinity of Best, Law and Charlton. With such stacked squad of club legends, one of the club’s greatest servants has become lost in the shuffle of history a little, Tony Dunne.

Dunne sadly passed away this past week at 78-years-old and for younger fans that sombre note, may well be their introduction to one of the greatest defenders Old Trafford has ever seen.

Dunne was not a flashy player or an ostentatious individual. The quiet, diminutive handsome Irishman was a dedicated, reliable and crucial part of United’s rebuild after the Munich Air Disaster. His former United and Ireland teammate, Johnny Giles described him as “the best left-back in England for an entire decade” and “the complete player” in an appearance on NewsTalk.

Dunne was blessed with incredible pace, the technical versatility to play on either flank and had the stamina to cover an entire side of the pitch. His crowning glory of the 1968 European Final win was more than he deserved for a distinguished career. He played every round of the competition that year, despite rupturing an achilleas tendon in the quarter-final. He had only missed six matches in the four-season stretch ending in that glorious night at Wembley Stadium. He was a footballer, very much comparable to the great Denis Irwin.

Much like Irwin, Dunne was the classic ‘first name on the team-sheet’ kind of footballer. A player’s player and a man of the people. As Giles outlined, Dunne rose to prominence at a time where the game began to modernise, and full-backs were required to be quicker and cover an entire flank with wingers in the manner of Sir Stanley Matthews, becoming less prominent. This was a feature that became prominent of many of the great teams of the 60’s, including England’s 1966 World Cup winning side and the great Inter side under Helenio Herrera.

Dunne arrived in Manchester as a nineteen-year old in 1960 from Shelbourne, where he had won the FAI Cup in 1959. He was brought to the club, initially as a backup for Shay Brennan and Noel Cantwell. However, the foresight in his signing was to be a part of the rebuilding job after the team was decimated in the Munich Air disaster. After three years, his shot at the bigtime arrived with a starting berth in the 1963 FA Cup Final and was excellent as United beat Leicester City 3-1.

In United lore, this Cup Final has been somewhat forgotten over time. However, the 1963 FA Cup win was arguably one of the most important trophies in the history of the club. The first trophy since Munich and secured in a season where the club flirted with relegation.

Dunne would go on to make 535 appearances for United, as well as 33 appearances for Ireland, putting him in the top ten for all time appearances at the club. Adding two league titles and a European Cup to his collection.

It is a shame that he left the club on such bad terms then in 1973 after falling out with then-manager Tommy Docherty. However, the real breaker was, what Dunne felt was a betrayal of trust by Sir Matt Busby about not supporting his testimonial, as an interview with the Irish Times he gave made clear.

“Matt was a great manager who could get players to walk through fire for him. I would have entrusted my life to him, but in the end, he let me down.” (1999)

After spending five years at Bolton until 1979, Dunne wound down his career in the now-defunct North American Soccer League with Detroit Express. Nevertheless, his time in Manchester greatly endeared him to the North West and he spent the rest of his life, residing in Sale and indulging his passion for golf by running a driving range in nearby Altrincham.

Dunne was not one of the box-office, entertainer like some of his more celebrated teammates during a glorious decade for the club but he was as important as any of them. So, in this sombre week during a difficult time, let us take a moment or two to appreciate Dublin’s own Anthony Peter Dunne.