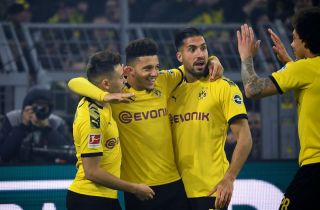 Head of football at German outlet SportBILD Christian Falk has done an interview with UtdReport.

A few things from the article jumped out at us — but Emre Can making it clear he doesn’t think Borussia Dortmund teammate Jason Sancho should join Manchester United in the summer is definitely one.

Sancho has been heavily linked with a move to Old Trafford, but The Sun ran a story earlier today claiming United are wary of Dortmund’s transfer demands — looking for up to £115m in exchange for the England international.

Falk was asked is United seen as a step up in their career from Borussia Dortmund or RB Leipzig.

The German reporter said: “I just asked this question to Emre Can. He said: ‘No, United is not a step up to Dortmund.’ However, he was a Liverpool player. In the case of Jadon Sancho, it would definitely be the next step in his career from a player’s perspective. I have heard from my sources that United’s management is ready to invest 300 million euros to build a new team. This is also a sign to players like Sancho that a big team is ready to be built up at United — there is a huge incentive. United weren’t convincing enough for Timo Wener’s poker. The next player will be moved on more aggressively. The 300 million euros can also be spent during this summer — if the needed players are on the market, and if they can sell some players.”

Why would it matter — having to sell players — if there is genuinely €300m available in a transfer kitty for Solskjaer this summer? There’s no way we’ll spend that much anyway.

Moreover, this almost contradicts the piece in The Sun because United wouldn’t baulk at paying Dortmund what they want for Sancho if they really had €300m to spend on players this summer.

But Can seems happy to pop a dig at United — trying to use Liverpool’s recent run at success as a tool to stay relevant.

He doesn’t know how big of a step it is to join United and Sancho should ignore anything he says.

READ MORE: The Cup Winners Cup – a forgotten tournament in the heart of United