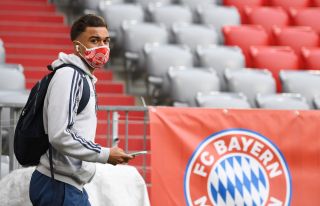 There has been plenty speculation suggesting Bayern Munich star Corentin Tolisso could be on his way to Manchester United this summer in a £31m deal, with Rafael Da Silva backing his ex-Lyon teammate to be a hit at Old Trafford.

But Toilisso’s agent has rubbished rumours.

A tweet from RMC Sport journalist Mohamed Bouhafsi claimed Tolisso was in talks with United over a potential £31m switch in the transfer window.

Da Silva took to Twitter, reacting to Bouhadsi’s tweet, saying: “One of the best midfielders I play with, I think will be perfect for Manchester United. Hope he goes there.”

One of best midfielder I play with, i think will be perfect for machester United. Hope he goes there. https://t.co/n8ei3SEyfe

If you had the same hope about this deal happening, keep reading but you will be disappointed.

“I’m not having any talks with Manchester United,” Tolisso’s agent Eric Castagnino told Sky Germany. “Corentin is currently injured and his return to the pitch is currently a top priority.”

The French midfielder is likely to miss Bayern’s remaining Bundesliga pictures, though there’s a chance he could play in the Champions League — depending on when it returns and how far the Germans go in the competition.

READ MORE: What Man United have done to boost Old Trafford atmosphere with no fans