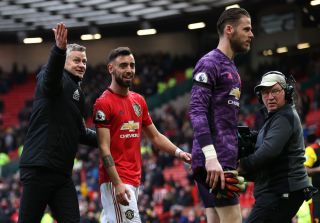 Ole Gunnar Solskjaer has reportedly decided on the plan to solve his biggest Manchester United conundrum.

The United manager is faced with the arguably enviable task of finding a way for two quality creative midfielders in Paul Pogba and Bruno Fernandes to fit into the same team.

Pogba and Fernandes have not yet played together for United, with the Frenchman nursing an ankle injury when the new signing came in and revitalised the attack.

But now Solskjaer has a full complement of players to select from and will surely find it too difficult to leave out either of his most gifted players.

And according to the Sun, the Norwegian has chosen Pogba to fill the number 10 position behind striker Anthony Martial. Pogba is said to have played in the role in United’s intra-squad friendly game at Old Trafford and impressed.

Fernandes would therefore operate where he would be less effective going forward for United, in a more withdrawn role alongside Nemanja Matic.

While this could be one possibility for Solskjaer when United come up against Tottenham next Friday, we would be very surprised if this is what he opted for.

Fernandes was crucial in the number 10 position during the 11-game unbeaten run before the enforced break, and it would be a surprise to see him move from a role where he has made United more dangerous and unpredictable in attacking transition.

We would prefer to see a role reversal of what the Sun’s report has suggested with Pogba in the deeper midfield role which he is more familiar with.