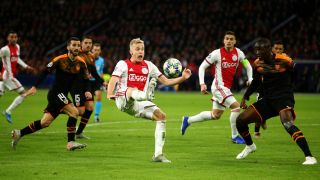 If press reports are of any significance, Ole Gunnar Solskjaer wants to add another midfielder to his Manchester United side this summer.

All three players fit the profile of young attack-oriented midfielders who would build upon United’s current selection of Paul Pogba and Bruno Fernandes. Despite already having two established players to play in advanced midfield areas, Solskjaer seems to be after even more, with the ability to offer game-time to a third advanced midfielder, especially if one of Jesse Lingard and Andreas Pereira leaves the club this summer.

The question is, which one would fit in best at United, and help the Red Devils push towards being a force in Europe again?

Ajax midfielder Donny Van de Beek rose to prominence as a key figure in Eric Ten Hag’s brilliant 2018/19 Ajax side, playing as the fulcrum of the midfield and attack as Ajax knocked out Real Madrid and Juventus to reach the Champions League semi-final.

At just 23, it is widely believed that Van de Beek will continue his progress towards being one of Europe’s best midfielders. His performances were so instrumental to the side that they drew the attention of Real Madrid manager Zinedine Zidane, who currently leads the race to capture his services (via talkSPORT).

Van de Beek fits the mould of a modern attacking midfielder, blending box-to-box midfield traits with impressive chance creation and end-product. His direct style and tendency to play short passes would make him comparable to Fernandes, but his positional versatility is more similar to Pogba.

Van de Beek’s progressive presence in midfield has even seen him play in a holding role for Ajax, which is a statement of his defensive solidity even if he would never be deployed as United’s deepest midfielder.

United’s numbers this season have been dire, as Scott McTominay’s five direct goal contributions were the most of any United central midfielder in the Premier League before Fernandes matched them in his first five matches. Having registered 17 goals and 15 assists in the last two Eredivisie seasons, Van de Beek would immediately help Fernandes and Pogba improve United’s numbers towards title-winning amounts from the centre of the park.

His ability to easily deputise for both Pogba, in a deeper midfield role, and Fernandes, further forward, would allow United to rotate all three midfielders and keep them fresh throughout the season. Moreover, Van de Beek’s Champions League experience exceeds that of all United’s current midfielders except Pogba.

Recent displays from Fernandes and Fred, both midfielders who joined from much weaker leagues, suggest that Van de Beek can settle into a United side that has improved its organisation and squad morale over the last 12 months.

The concerns with Van de Beek would relate to Real Madrid’s current interest in him. If Zidane can squeeze him into his already-stacked midfield, Van de Beek would likely see a better future at the Bernabeu, as Toni Kroos and Luka Modric reach later years of their careers.

Of all the midfielders currently linked with United, the Old Trafford faithful are likely to be most familiar with Jack Grealish, particularly after the Aston Villa midfielder scored a spectacular goal on United’s home turf this season.

With 13 direct goal contributions in this season’s Premier League (WhoScored), Grealish has been involved in a remarkable 38% of Aston Villa’s goals (Premier League Official Website), playing a crucial role in the side’s relegation fight this season.

Grealish is a special prospect because he combines the traditional traits of an attacking midfielder with those of a winger. The 24-year-old registers 2.7 key passes per 90 minutes and maintains almost 85% pass accuracy while also registering a remarkable 2.2 dribbled per game in the Premier League, maintaining his status as the league’s most fouled player by a distance (WhoScored).

The variety of traits the midfielder offers has guaranteed his status as Villa’s best performer whether from attacking midfield or left-wing, and he would bring the same versatility to United, offering cover for Bruno Fernandes or an alternative to the instrumental Marcus Rashford. United tend to struggle without Rashford, and his irreplaceable style calls for alternatives in his absence, which Grealish could offer.

Most importantly, Grealish’s move to United likely fringes upon Aston Villa’s relegation (via Sky Sports), which would force a move for a player that is far too talented for the Championship. This would likely allow Grealish to move for a much lower fee than the likes of Van de Beek, and Kai Havertz in particular.

The player is a virtual guarantee to succeed in the Premier League and would allow the likes of Fernandes and Rashford to rest for potentially key European clashes, should the Red Devils be playing in next season’s Champions League.

The only hesitance would be his suitability to play alongside Fernandes in a midfield three; neither quite have the defensive nous to be playing in the pivot of Solskjaer’s 4-2-3-1, meaning that Grealish would not play in the absence of Paul Pogba unless United were up against significantly inferior opposition. United have Fred to play in that role, though, and he could offer a viable option for bigger games.

There is no question that Kai Havertz is one of the most talented youngsters in Europe right now. The player has exhibited world-class potential in a variety of positions despite being just 20 years old, shining from the right wing, in attacking midfield roles, and even up front for Bayer Leverkusen.

His exploits in all three roles have seen him accrue a tally of 14 goals and 7 assists in the Bundesliga and Europa League this season, a tally that would be impressive for any of the world’s top midfielders.

While Havertz does not exhibit the defensive nous of Van de Beek, nor the dribbling excellence of Grealish, the midfielder tops this list in terms of end product, pass accuracy and quantity, and even aerial product, which is hardly a surprise considering the player stands at a remarkable 6’2.

Havertz seems destined to reach a height that most other players can only dream of, but many questions also surround a potential transfer that could bring the player to United. This report from ESPN, which states that Havertz prefers a move to United over domestic rivals Chelsea, also suggests that the player could command a fee in the region of £120 million, which is highly unlikely considering the perceived prioritisation of a move for Jadon Sancho, as per Manchester Evening News.

Sancho should rightfully remain a priority signing for United, and even if Ed Woodward squeezed the fee required to add Havertz as well, the German youngster would not play the matches required to justify said hefty sum.

Finally, like many Bundesliga stars, Havertz seems destined for a move to Bayern Munich (Sky Sports), where he would not only fit in better, but also represent the long-term successor to Thomas Muller, who currently has the most assists in Europe playing behind Robert Lewandowski (WhoScored).

A clear path exists for Havertz to emulate and eventually even usurp the impact of one of the best German players of this generation. Why would he reject that path for a fringe role at United?

While Havertz is by far the best midfielder being linked to United, he is not the right player to fulfil Solskjaer’s current needs. As such, a move for Van de Beek or Grealish seems more likely,

Which of the two Solskjaer ends up with could rely on circumstance. The variables that exist can be broken down into availability and managerial preference.

Villa’s relegation and Real Madrid’s interest in Van de Beek will sway the fees required for United to lure both players. Meanwhile, Solskjaer will have to consider the upside of the respective players, as well as whether he prefers the depth Van de Beek offers deeper in midfield, or that which Grealish adds out wide.

Should United end up with either player and retain Pogba and Fernandes, expect United’s midfield to dazzle for the duration of next season.