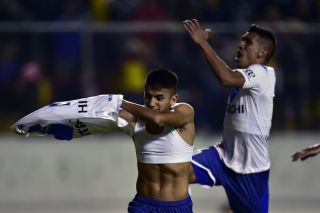 Almada is regarded as one of the most talented young forwards in South America and has reportedly caught the attention of United scouts with his impressive performances this season.

The 19-year-old appears destined for a move to a bigger club this summer with a host of European clubs said to be interested.

And his club have confirmed they have no power in keeping hold of their star asset.

“There’s no way to hold him,” a Velez Sarsfield’s board member told ESPN.

“To all the offers that are seen in the media, add one from the local market and two from Italy.

“We’re going to wait for the market to open so that we know what is real and who’s asking, and we’ll be as serious at the negotiating table as we have been since this administration began.”

The Reds still have ambitions to sign the Borussia Dortmund starlet this summer, regardless of the financial hit taken during the coronavirus pandemic.

But Almada, among several others, is considered a fall-back option if a move for Sancho does not materialise.

Stretty News exclusively reported this week that no approach has yet been made for the Argentine youngster from United. We understand the teenager has a release clause in his contract of £22.3m.

Almada is certainly a player to keep an eye on in the coming weeks as we enter a crucial summer period for the club.