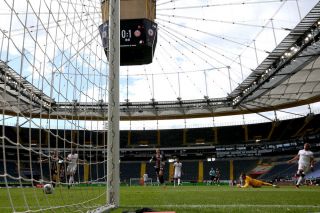 According to ESPN reporter Mark Ogden, Eintracht Frankfurt’s Commerzbank Area is being lined up to host a Europa League mini-tournament in August.

The final this year was due to be held in Gdansk, Poland, but there are plans to move the final away due to the impact of the COVID-19 pandemic.

It has already brought the biggest leagues in Europe to a halt with some (Ligue 1) opting to cancel the season altogether.

However, the Premier League returns next week and the Bundesliga is already in full flow as they attempt to conclude the remaining fixtures, reward the champions and to see who will face relegation.

European football’s governing body appears to be doing the same while taking into account that clubs are busy trying to finish their domestic campaigns too.

UEFA’s next Executive Committee meeting is scheduled on June 17 and we’ll know more about their apparent plans to switch venues for the Europa League final then.

In the first-leg of our Last 16 tie against LASK, Manchester United came away with a 5-0 win to take back to Old Trafford. Wherever the second-leg takes place you’ve got to fancy our chances regardless of what team Ole Gunnar Solskjaer puts out.

And the aim should be to win it outright as another route into next season’s Champions League.

Manchester United are on course to reach the quarter-finals and the competition currently consists of big European clubs like Inter Milan, AS Roma and Bayer Leverkusen. Not to forget fellow Premier League side Wolves.

Sources have informed ESPN that the final is likely to be moved to Frankfurt due to the German city possessing the infrastructure required to host eight teams.

Meanwhile, the Champions League final could be moved from Istanbul’s Ataturk Stadium to Lisbon.