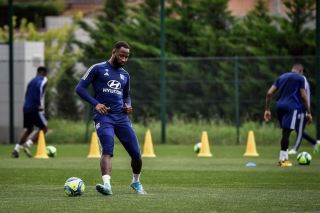 We cover Manchester United news every day and can tell you talk of Lyon striker Moussa Dembele has diminished over the past two months. The Ligue 1 season was cancelled as a result of the COVID-19 pandemic but that hasn’t put a stop to transfer speculation. You would think Ed Woodward and Matt Judge are busy negotiating potential deals but it’s going to be a difficult transfer market for everyone.

Things are getting a little more interesting on the Dembele front with Lyon sporting director Juninho admitting the Frenchman could leave the club in the summer.

“Moussa’s had a good season and still has a margin to progress,” Juninho said at the unveiling of new signing Timo Kadewere (via Daily Star). “He’s a pure centre forward who brings us strength and presence in the box. He scores goals.

“If we lose a player of that level, we’ll look for replacements of the same standard.”

It sounds like Juninho is warning Lyon fans that Dembele could be on his way and he’s trying to ease their concerns by promising a striker who can offer the same goal tally next season. That won’t be easy… Best of luck to him!

Last month, the Express ran a piece on how United could look next season with Dembele leading the line, with some analysis on how he’d compete with fellow Frenchman Anthony Martial for a starting role.

The 23-year-old was also heavily linked with a move to Chelsea in the January transfer window, as per Sky Sports, and as things stand Chelsea are leading the race to sign RB Leipzig goalscorer Timo Werner.

Lyon decided against selling their star striker midway through the season. It’s something they probably regret now because they his transfer value could take a hit this summer.

With 22 goals in 42 appearances this season, Dembele will have no shortage of options.