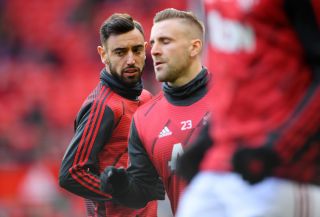 Manchester United defender Luke Shaw has clarified what really happened in the intra-squad training game at Old Trafford on Saturday.

United decided against releasing footage of the game in what was the first time the Reds were back in their home ground since the monumental Manchester derby victory in March.

Supporters saw photos of the game played in an empty stadium and noticed that star midfielders Bruno Fernandes and Paul Pogba were on opposing sides.

But the outcome of the 90 minutes, designed to build match fitness, was still unknown with plenty of rumours over the goal scorers doing the rounds on sisal media.

Shaw has finally cleared up the outcome, and was pleased to find the net twice in a high-scoring draw.

“There have been a lot of different things circulating on social media and I’m happy to set the record straight,” he told United’s official website.

“It did end 4-4 and I did score twice! Also on my team, Bruno got one and Jamo [Daniel James] got one, while, on the other team, Rashy [Marcus Rashford] got two and so did Odion [Ighalo].

“To be fair, my first goal was decent. It was from a great cross by Bruno and my volley went straight in. I was happy with it. My other one was just getting forward, Juan [Mata] played it to me on the edge of the box, I took a touch and shot in. It was quite an open game, as you can probably gather, with a lot of space, since it was the first game back.

“Everyone looked good and the most important thing was getting minutes in the tank. This was definitely a step forward from the games we’ve been having at the training ground.”

The outcome of the game was largely irrelevant for manager Ole Gunnar Solskjaer, whose primary concern is to have players up to match-fitness ahead of next Friday’s resumption away to Tottenham Hotspur.

But the match was always going to attract interest from the fanbase, and hopefully Shaw can find the scoresheet when it really matters during the run-in.

United since arranged a friendly with Stoke City at the Carrington training facility which had to be cancelled at the eleventh hour with opposition manger Michael O’Neil testing positive for coronavirus, BBC Sport confirmed.

As reported by the Manchester Evening News, Solskjaer is keen on arranging at least one more friendly before the Premier League restart next weekend.