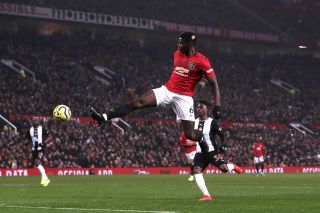 Continuing our spree of exclusive content the past week, including an interview with Manchester United striker Marcus Rashford, Brian Murphy catches up with ex-player Ben Thornley.

Brian: Welcome back to Stretty News Ben, and hopefully we find you safe and sound during these troubling times for the world. Last time we spoke to you, it was just after the transfer window closed and the 2019-20 season was about to commence, so where best to start than with the signings from that window? How have you felt Harry Maguire, Aaron Wan-Bissaka and Daniel James have settled into life in the red shirt so far?

Ben: “I think Ole’s summer signings have done really well! It’s always difficult coming to a club like Manchester United because the expectation for success is instant as soon as you walk through the door. United haven’t won the Premier League since Sir Alex’s final season – and they won’t win it this year either – but the acquisitions of James, Wan-Bissaka and Maguire have been a master stroke in terms of tightening up the defence and injecting even more pace in attack with James. On the latter, he has probably had the toughest debut season but he has come from the Championship, so adapting to life at Manchester United has come slightly easier to the other two with them already having invaluable Premier League experience.

“All three have contributed to a really good season so far but I’m sure all three will also have a say in where we finish. Wan-Bissaka is so difficult to bypass. When you think you’ve beaten him his leg comes out and perfectly times a last ditch challenge. The best one-on-one defender I’ve seen in a long time. Harry Maguire was my choice to captain the team before he was actually given the armband. A leader, a cool head and the confidence on the ball to step in when needed to carry the ball, play a raking or telling pass and, as we saw at Tranmere in the FA Cup, he can score spectacular goals.”

Brian: Since those arrivals we’ve added the signing of Bruno Fernandes to our ranks, who has had an immediate and very instant impact on, not just the first team, but the United faithful in the stand as well, who have taken to him from the off! Just how impressed have you been with Bruno?

Ben: “Bruno Fernandes has had as immediate an impact on Manchester United like Eric Cantona. A big statement I know, but he didn’t need any time whatsoever to get used to his surroundings. He’s comfortably at ease putting on a red shirt and that shows, not just in his performances to date, but in his teammates too. He wants the ball and will take it anywhere on the pitch, he has a keen eye for a decisive pass and he can score goals, take accurate dangerous set pieces and is coolness personified from 12 yards (although Rashford might have something to say about that!). A very good footballer and again, an astute signing by Ole Gunnar Solskjaer. Quick mention for Ighalo too… Few raised eyebrows when we signed him but he has scored goals and he brings something different to our forward line. He holds the ball up superbly well and now with plenty of fitness work under his belt (remember he had hardly played or even trained in the weeks/months leading up to his arrival) I think we will see even more from this guy.”

Brian: I guess, naturally, when we discuss the midfield at United these days, it inevitable brings us to the subject of Paul Pogba. Do you believe Paul’s going to remain at United long term, and based on this, what is your strongest and favoured midfield 3 in the centre for us at current?

Ben: “I think Paul’s head has been turned back in the direction of Manchester United. I think he can see what an exciting team Ole Gunnar Solskjaer is building and he wants to be part of it. A Paul Pogba who is desperate to perform for United is a huge asset to have. His return and Marcus coming back is like two new signings for these remaining fixtures and what a difference they will both make if they are on top of their game, as Marcus was before his injury struck and how we all know Pogba can be when his mind is right. The best long range passer of the ball with both feet that I’ve ever seen. I mean that! I hope he stays and plays a major part in what I believe could be a title winning team in two seasons time. Maybe next season?! He should have a fight to get back in though. Fred has been our most improved player, Scott McTominay was sorely missed when he was injured and is proving hard to omit and Nemanja Matic, who was out in the cold and destined to move on before Xmas, has also come into the team and done very little wrong so it won’t be easy for Paul.  At the minute I would go with a diamond of Matic, Fred, McTominay with Fernandes at the point but Solskjaer is blessed with a fully fit squad so I doubt we’ll see that system this season.”

Brian: After a tragic lockdown period during the coronavirus pandemic, it looks like we’re getting football back shortly, albeit under strange circumstances (no fans). What’s your feelings towards an empty stadium and the recommencement of football under some new rulings regarding subs, VAR etc?

Ben: “It’s been a terrible time for everyone. This pandemic has knocked everyone sideways and worse than that many lives have been lost. It will take a long time for many of us to recover mentally, physically and emotionally from the strain this has inflicted the world over. Probably the right time to pay homage to all the people who put others before themselves to protect and save this country — absolute heroes all of you. You know who you are and thank you!

“Up until this point football has quite rightly been put in the background, but I think most of us are over the moon that we can get back to watching the sport and the team(s) we love even though the fans, a massive part of any team’s make-up, cannot be there inside the stadia cheering their team on. It is eerie. I commentated over in Austria just before lockdown in a stadium with no fans. I have to say that Manchester United made it look as easy as the scoreline suggested and if they prepare exactly as they did that night then, and as much as it will never be the same having no fans, they look as well equipped as possible in being able to deal with huge empty stadiums. I also agree with the 5 subs rule but this will also favour the teams with the largest depth to their squads and may be a telling factor in this sprint finish where injuries are definitely going to happen.”

Brian: There’s still a massive amount to play for, in the remainder of this season, with Champions League qualification and silverware still very much in our grasp. With this break in the season behind us, and a fully fit squad, where do you see us finishing the season and will there be a trophy in the cabinet at the end of it?

Ben: “I fully expect us to get into the top 4 and the chance of an FA Cup also looks a possibility, but I’d love Solskjaer to win the Europa League. I think it would be a marvellous achievement but there are some tough games to see off if we are to try and win either or both of these trophies. Our run in should never be taken for granted but with only 2 teams to face in the top 7 (Spurs and Leicester on the final day) and the fact that Solskjaer has got his team in brilliant shape, I do expect us to go on a really strong run-unbeaten if possible and that should secure 3rd… It might make for a very interesting last day!”

Brian: Looking ahead to after the season ends and whenever the transfer window opens again, we’ll be faced with many sources of speculation surrounding who’s coming in. Jadon Sancho is the name on everyone’s lips, with Jack Grealish not far behind. Can you see both/any happening, or are there other names you could see becoming linked with a move to Old Trafford?

Ben: “Jadon Sancho is extremely talented and I fear Man City might have dropped a bit of a clanger, but their loss was certainly his gain and at Dortmund he has scored and created goals-nearly 40 combined which is sensational form. Might Solskjaer look elsewhere now Bruno has come into the side, I think there is room for them both! Grealish has so much talent but his off the field antics might give United cause for concern. He’s got skill to burn and can win games on his own but does have a tendency to let himself down through ill discipline. I like James Madison at Leicester but I doubt Brendan Rogers will sell him to us! As per usual, United will be linked with everyone but one thing is for sure; the transfer fees we were once used to seeing before the pandemic, will not be seen for a long time-if ever! Whoever Solskjaer goes after, you can be sure that homework has been done, he will improve our team and he will be excited about being part of something special that Solskjaer and his staff are doing at our great club!”

Brian: Thanks again Ben for rejoining us on Stretty News, always a pleasure to have your thoughts shared and we look forward to our next discussion!