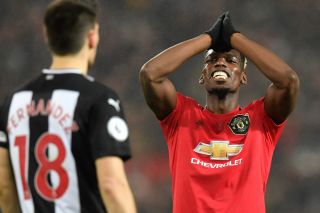 Last night we brought you some quotes from a recent interview in MUFC fanzine Red News with former Manchester United winger Willie Morgan.

He gave manager Ole Gunnar Solskjaer his firm backing and we can’t wait to hear his new show on Football CFB which is launching today.

Morgan is outspoken and has a ton of stories to tell. After all, he joined a European Cup-winning side in 1968 managed by Sir Matt Busby, a team consisting of George Best, Sir Bobby Charlton and Denis Law.

During his seven years at Old Trafford, Morgan became a fans’ favourite and six-years ago he released his autobiography, entitled On The Wing.

However, the former Scotland international has hit out at Manchester United midfielder Paul Pogba, describing him as a “nightmare” who he thinks should have been moved on last summer.

Before we get to what Morgan said about Pogba, I’d like to thank Jimmy Williams (Red Devil Talk) for getting the interview and sending some quotes for Stretty News to publish.

There is no disputing that Pogba is a controversial figure at Old Trafford and his agent’s outspoken ways have not helped his case. I feel there is a lot of love lost when it comes to Frenchman.

Morgan told Red News: “I would have moved him on a year ago. He is average anyway. He is a nightmare. He has caused so many problems for managers and he will continue to do that. So, the sooner they get rid of him, the better. He is an average player. Average. If you are five-nil up or six-nil up, he will do his little tricks. But, when you are in there fighting, you can’t find him with a radar. He is not for me.”

Pogba has a lot to prove when football resumes. He missed most of the season through injury and now is a time United need him most.

There is hope — with the addition of Bruno Fernandes — that Pogba will rediscover his spark. But there will be no excuses if he doesn’t.