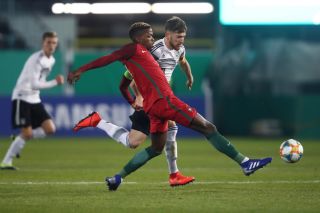 Reports in the past week would have you believe Manchester United are in the race to sign Benfica starlet Florentino Luis this summer.

It comes as no surprise to see United liked with defensive midfielders with the transfer window set to open. Nemanja Matic is kicking on now and names like Florentino Luis continue to be persistently linked.

Sources told ESPN that Luis is attracting interest from some of the biggest clubs European football has to offer, including Manchester United and AC Milan.

Meanwhile in Spain, TodoFichajes claim Bundesliga outfit Bayer Leverkusen are ready to make a move for the Portugal U-21 international.

Although he is not a like-for-like replacement should they lose talisman Kai Havertz in the summer, but how else would be structure a deal for Luis and sign other players as well?

Everyone is saying the transfer window will be financially hit amid the coronavirus pandemic, so it’s a fair question to ask, even if transfer fee being reported seems doable. The report claims Leverkusen plan to make a move for Luis before the market opens…

I’m not saying they won’t identify Luis as a prime target this summer – it’s clear a lot of clubs rate him highly and £20m sounds like a bargain on the back of that. But I do see this as a deal United would be able to get over the line quickly if their interest is genuine.