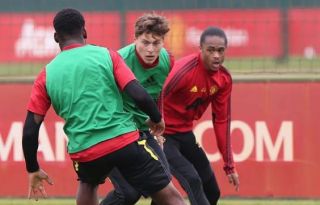 There was some exciting news yesterday when youngster Teden Mengi had been included in Manchester United’s first team training for the first time.

The centre-back was pictured at Carrington and posted on Instagram that he was ‘glad to be back on the grass’. In addition to the post, he uploaded a second picture of him competing for the ball with Tahith Chong and Victor Lindelof.

Good to be back on the grass 🙌🏾

This season he made his breakthrough to United’s under-23 side after establishing himself in the under-18s as team captain. Is it too early for a first-team debut, though? Maybe but I wouldn’t be surprise if he got some minutes between now and the end of the season.

The under-23 season has been cancelled, so there’s a reason they’ve asked him to stay around with his seniors.

But Mengi was not the only additional face at training on Monday. He was joined by Portuguese goalkeeper Joel Pereira.

Pereira also took to Instagram and declared himself ‘Happy to be back,’ as it was his first time at Carrington since August. With the Scottish season cancelled, Pereira is back from his loan spell at Hearts, who were relegated for being four points adrift at the bottom of the SPL with eight games to go.

Missed this feeling, happy to be back ⚽️🐈🙏🏼

It will be interesting to see what happens with Pereira next…