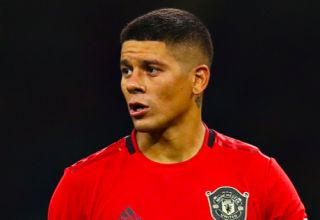 Manchester United loanee Marcos Rojo has been caught flouting lockdown rules for a second time in his native Argentina.

Manchester Evening News reports that the defender, currently on loan at Estudiantes, was filmed relaxing with friends in the city of La Plata, and was seen entering a sports facility.

“As a result of having learned through the media that Mr. Marcos Rojo and other people have entered our facilities on the premises of 7 and 602, from The Israelite Literary Center and Max Nordau Library in La Plata we want to inform members and to the whole community the following:

“Firstly, in compliance with the Preventive and Mandatory Social Isolation, our institution remains closed, having even offered the municipal authorities our facilities for sanitary use by the community, if necessary, for purposes related to the situation we are experiencing due to the pandemic.

“Secondly, neither Mr. Marcos Rojo nor the other people were authorised by our institution to enter the property. We are investigating what happened as a result of which we will take the appropriate measures, but under no circumstances do we approve this flagrant violation of the regulations imposed by the national, provincial and municipal government, adding to the condemnation of the fact.

This warning comes just a month after Rojo was filmed playing games and socialising with a large group of friends which prompted United to remind him of his responsibilities.

Rojo has now broken quarantine restrictions more times than he has played while out on loan as he has made just one appearance for Estudiantes.

The 30-year-old appears to have a blatant disregard for the strict rules which have been put in place to avoid the risk of spreading COVID-19.

We do not expect the player to have a future under Ole Gunnar Solskjaer when he returns to Manchester at the end of the season.