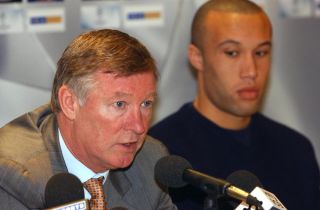 It was a phone call from Sir Alex Ferguson that convinced him otherwise.

An interesting side note is my first game at Old Trafford was United v Liverpool in September 2004, with Silvestre scoring a brace to seal a 2-1 win.

But it is the icing on the cake to hear that former Liverpool manager Gerard Houllier wanted to sign him before Ferguson intervened.

In an interview with FourFourTwo magazine, Silvestre said: “That summer, Marcello Lippi arrived at Inter and recruited another wing-back, Grigoris Georgatos, who was a bit older than me.

“My game time was going to diminish and I wanted to play.

“Gerard Houllier had been my coach at youth level in France, so we knew each other well, and he called to ask if I wanted to join Liverpool.

“He said he wanted me to play left-back for them, and that while the competition would be there, I was in a good position to start most games.”

Recalling that fateful phone call from Sir Alex, the former French footballer added: “Alex Ferguson phoned me a few days later to register his interest. The choice was easy to make because United had just won the Treble.

“Sir Alex was like, ‘You’re going to play left-back and centre-back — I need you for both positions’.

“I remember that I arrived in Manchester on a Thursday and by Saturday I had already played my first game — at Anfield, of all places, against Liverpool!

“That was madness: I didn’t even know my team-mates or speak the language well.

“On matchday I had a brief chat with Houllier, who jokingly asked me, ‘Why didn’t you sign for us?’ But he said he understood my choice.”

I didn’t realise how close Silvestre came to joining Liverpool – but he did sign for rivals Arsenal when his time at Old Trafford came to an end, despite efforts from then-Manchester City manager Mark Hughes to seal a deal.

United had definitely got the best out of him and he only spent two years at The Emirates before moving on to Werder Bremen, Portland Timbers and Chennaiyin FC.

Fergie had a knack for securing deals under the noses of rival managers. He did it to City before United finalised a deal to get former Tottenham striker Dimitar Berbatov!