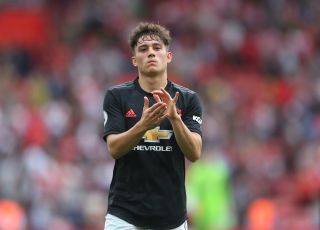 Manchester United will not let Daniel James leave this summer, despite reports that the club could sanction a loan exit for the Welsh winger.

The Sun took United fans by surprise this week with the suggestion that James could be allowed to leave on loan next season.

James has played a key role in his maiden season at Old Trafford, offering Ole Gunnar Solskjaer a new attacking outlet with his raw speed on the flanks.

Not many had expected such an impact from a relatively unknown Swansea City winger in the Championship, but he has gone on to make 35 appearances across all competitions for the Reds.

It had been claimed that the 22-year-old would be let go temporarily in order to develop with a concern he would not get much game-time if United secure the signing of top target Jadon Sancho this summer.

But the Manchester Evening News have dismissed those reports, claiming Solskjaer sees James as an essential part of his future plans, regardless of whether they sign Sancho.

While James may not be a regular starter, he is a fantastic option to have off the bench and can cause defenders huge problems with his lightening speed on the counter-attack.

We expect the 22-year-old to feature prominently in United’s nine remaining games of the Premier League season.