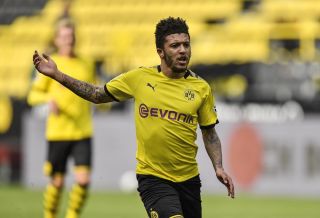 Manchester United appear to have been handed a huge boost in their pursuit of top target Jadon Sancho this summer.

ESPN report United’s rivals for Sancho’s signature Chelsea fear that the Borussia Dortmund starlet will move to Old Trafford and are now assessing other options.

It is believed Chelsea are not completely resigned to the fact they will miss out on the England winger this summer, but have the inclination that he would prefer a move to United in a deal that could reach £120m.

Frank Lampard is now monitoring the future of Bayern Leverkusen starlet Kai Havertz, another of the Bundesliga’s promising young stars that has stolen the headlines since the league returned in mid-May.

However, the Blues would face serious competition to sign Havertz, with Bayern Munich and Real Madrid interested in signing him as well as United who view the German international as an alternative to Sancho.

Chelsea are already finalising a move for prolific RB Leipzig striker Timo Werner and Havertz would add to a plethora of exciting attacking options.

If the London club can secure both forwards in the summer transfer window, they will become a serious force to be reckoned with next season.

However, their stance on Sancho is encouraging views for United fans, who view the 20-year-old as the dream summer signing.