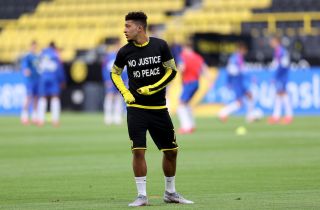 Hello and welcome back to Rowlesy’s Ramblings. We are one week closer to the resumption of Premier League football and United’s preparations ramped up with an intra-friendly with many key players getting minutes under their belt and finding sharpness once again in an empty Old Trafford.

Whether your excitement at the return can or cannot be contained is an individual decision based on where your moral compass lies, but most of us football lovers will see it as a semblance of normality and a welcome mood lifter in these testing times.

For now, let’s delve into some of the United stories making the news from the past week:

Chelsea’s impending purchase of Timo Werner cranks up the pressure on United’s pursuit of Jadon Sancho:

The respective situations of United and Chelsea can be easily paralleled: Both looking to bridge the yawning chasm between themselves, City and Liverpool. Both with young, hungry yet inexperienced top flight managers striving to earn their stripes. Both gaining widespread plaudits for their willingness to blood promising youngsters to kickstart new eras. Both currently vying for the coveted fourth spot to get back to Europe’s top table.

The key difference has been on the boardroom table in recent years. Whilst United have been hamstrung by a self-inflicted scattergun approach to transfers, Marina Granovskaia’s record as a fierce negotiator speaks for itself – drawing in a nine figure fee for Eden Hazard with only 12 months to run on his contract, £65m for flop Alvaro Morata and £57m for Diego Costa, who had become the loosest of all cannons in 2017 after a spectacular fallout with Antonio Conte.

Chelsea have cash reserves stored from the Hazard and Morata deals, a summer transfer ban and a dry winter window. It is anybody’s guess how much that amounts to, but we have already seen them swoop in for Timo Werner and register their interest in Leicester’s Ben Chilwell. Who is to say that they could not efficiently mop up Jadon Sancho as well, particularly with Willian and Pedro leaving on free transfers?

If Chelsea are symbols of efficiency, United are disorganised chaos. Even with Ole Gunnar Solskjaer’s transfer success rate, the actual conducting of the transfers at boardroom level has still been shambolic. The alpha male strong-arm tactics Ed Woodward tries to adopt turns into weeks of protracted, tedious stalemate before eventually agreeing to the original asking price — Wan-Bissaka, Maguire and Bruno are high profile cases in point.

My understanding is Sancho is United’s prime target whenever the transfer window opens but is one thing fluttering your eyes publicly, as Granovskaia shows though, it is another altogether swiftly concluding deals.

Chelsea threatening to be very productive in the market should serve as a big wake up call to the powers that be at Old Trafford, that even with next season’s standings or competitions yet to be decided, deals, and talks at the very least, can be done.

It also ramps up the pressure on United’s transfer strategists to do everything to get Sancho signed across the dotted line. Despite Solskjaer’s signings coming up trumps, Ed Woodward and Co are not absolved of blame for the previous recruitment aberrations which contributed to the demises of Moyes, Van Gaal and Mourinho.

The scrutiny will intensify should United fail to acquire Sancho, given how public the courting has been. Chelsea are giving United a demonstration in what efficiency at the negotiating table looks like and how they are striving to get back to previous heights.

It remains to be seen if United follow suit.

De Telegraaf in Holland have been championing Ajax’s Donny Van De Beek to United over the weekend. This one could have some mileage in it — he is a good age at 23 with experience of excelling in the Champions League and ready to take the next step. He is versatile, playing at 6, 8 or 10.

He is technically very good, shows defensive industry and has chipped in with 8 goals and 6 assists in this season’s Eredivisie. Ajax’s CEO is, of course, ex-red legend Edwin Van Der Sar, who stills holds a favourable rapport with United, which is always handy when it comes to negotiations.

The report mentions a €40m fee, which is also appealing to United when it comes to proven, hungry players. When you weigh that up against the predictably inflated British prices for Jack Grealish and James Maddison, you can see why Van De Beek could be a realistic target for United.

As I have maintained for a good while now though, any move for a midfielder will hinge on the sale of Paul Pogba and while United hold all the cards on the Pogba front, I cannot envisage any midfielder coming in.

Return of Pogba and Rashford will hopefully see United pick up where they left off:

Speaking of Pogba, he is now reportedly fully fit, alongside one of United’s standouts this season Marcus Rashford.

They will bolster a squad who was firing on all cylinders before lockdown put pay to live sport in March and they can help United push on in their double quest for a return to the Champions League, through domestic standings and winning the Europa League.

That has to be the aim now for United and it is certainly possible.

Any team in the world would benefit from Pogba at 100% and Rashford chomping at the bit after a breakthrough campaign in terms of productivity.

Effectively, as cliched as it sounds, they will be like new signings once they return and that is a prospect to relish for United fans.