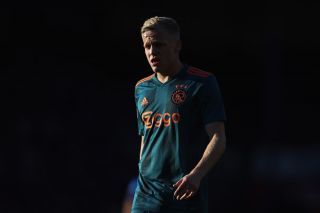 Manchester United fans are split in their opinion over whether the club should sign Donny van de Beek or Jack Grealish in the summer transfer window.

It has emerged that United have recently renewed their interest in Ajax midfielder Van de Beek after previously trying to sign him last August.

The Times report that manager Ole Gunnar Solskjaer sees the 23-year-old as a dynamic, versatile midfielder that fits his recruitment profile.

Van de Beek has a deal agreed with Real Madrid, but the move is now in doubt due to the financial crisis La Liga is facing due to the coronavirus pandemic and United could hijack the transfer.

Aston Villa captain Grealish, meanwhile, has been his boyhood club’s talisman in their Premier League survival bid but is largely expected to leave this summer to further his career.

As reported by the Manchester Evening News, Grealish remains high on Solskjaer’s list of transfer priorities.

Like Van de Beek, Grealish is a young midfielder who can adapt to play in a number of positions. Given their obvious similarities, we would be surprised if United attempted to sign both players in the coming months.

On Monday morning we asked our followers on Twitter who the club should opt for this summer, and the results were surprisingly split.

We believe Van de Beek would be the better signing due to his Champions League pedigree, movement off the ball and the options he offers Solskjaer due to his ability to play in the number 6, 8, or 10 position.

If it was down to you this summer… #MUFC

Idk what you think but Van De Beek over Grealish.

Due to the reliability of the reports combined with valuation concerns regarding Kai Havertz & Jack Grealish, I would probably lean towards Donny van de Beek being #mufc's third target for this summer — alongside Jadon Sancho & Jude Bellingham. pic.twitter.com/O3LqhpBa8U

Can anyone change my opinion that we should sign Grealish over Van de Beek ?

I'd rather we got Grealish than
Van De Beek tbh. Grealish is better.
VDB doesn't gas me up mehn.💀

Van De Beek is a champions league semi finalist and would cost £30-40 million less than Jack Grealish and can play in deeper positions than him. If the rumours are true Woodward needs to get it done.