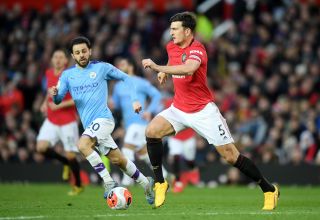 According to the Manchester Evening News, Maguire is the best defender in terms of carrying the ball forward up the pitch — doing it on more occasions than any other defender in the Premier League this season.

Solskjaer identified the England international as a centre-back who is comfortable enough to take the ball out of defence with the ball at his feet. And up against attacking players, Maguire is ranked the 4th best player in the league with moving the ball forward. Those ahead of him in the charts include Jack Grealish, Wilfried Zaha and Adama Traore. Maguire is the only central defender in the top 10, having carried the ball 6187 yards this season.

Gone are the days (don’t speak too soon!) when United used to resort to playing long-balls forward out from the back because Chris Smalling’s ineptitude in carrying the ball forward. And maybe the style of defending in Italy, or Roma more specifically, suits the Englishman and that’s why he seems to be appreciated more in Serie A.

I would argue that Phil Jones is better with the ball at his feet than Smalling, but we struggle to raise that point as he’s a centre-back incapable of defending.

Maguire has it all and Solskjaer needs to ensure the defence improves again next summer. I think it will if this summer a good defensive midfielder is signed.