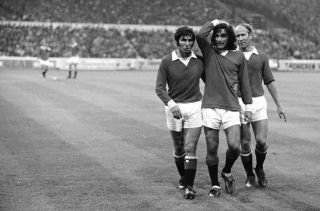 Former Republic of Ireland and Manchester United defender Tony Dunne has today passed away at the age of 78.

The Dubliner was part of Sir Matt Busby’s United team who won the European Cup in 1968 and he made over 500 appearances for the club.

In 1965 and 1967 he helped the side to league glory while spending an incredible 13 years at Old Trafford.

It is with great sadness we bring you this news — and former team-mate Alex Stepney was quick to react on Twitter, describing Dunne as “a class act”.

Very sad to hear that my good friend and Utd fullback Tony Dunne has passed away. My love to all the family. Tony was a class act. RIP.

Dunne signed for United in 1960 after playing for Shelbourne in Dublin. Nine years later, still at United, he was named the Irish Footballer of the Year.

When his time at United came to an end, Dunne joined Bolton before later moving on to Detroit Express in the North American Soccer League in 1979.

On the international stage, Dunne earned 33 caps for Ireland.

We send our respects to Tony Dunne’s friends and family.

Respect shown on Twitter for the late Tony Dunne

One of our greatest-ever full-backs. An integral part of the 1968 European Cup-winning side. A player who made 535 appearances in the red shirt of Manchester United.

Our heartfelt condolences go to the loved ones of Tony Dunne. May he rest in peace. pic.twitter.com/M8xYNdqMcU

A sad day for all @ManUtd fans with the news that 1968 European Cup Winning full back Tony Dunne has died aged 78. The Republic of Ireland defender was an unsung hero for United playing 530 times between 1960-1973. RIP

European Cup winning Tony Dunne has sadly passed away at the age of 78. Tony made over 500 appearances for Manchester United and was a big part of the club’s success post-Munich air disaster.

A United legend form my home city of Dublin. pic.twitter.com/YssVMExEe9

“Tony Dunne was a great full-back, one of the most underrated players in England. He was quick as lightning and strong in the air for a small fella. A quiet Dubliner, he played over 500 games for United – not bad for someone initially signed as cover.” Pat Crerand.