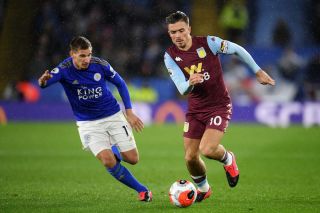 The Aston Villa skipper has been phenomenal in this season and has a pass success percentage of 84.4% with six assists to his name across all the competitions for the relegation-threatened side. These stats justify the eagerness of United to sign the star of Villa Park.

The 24-year-old Englishman has been with Aston Villa since he was six-years-old. This makes the transfer of Jack Grealish difficult as his loyalty to his boyhood club could demand a massive transfer fee.

However, The Mirror suggests that Ed Woodward is all set to splash a fee of around £70 million to sign the player. Also, Manchester United are ready to provide the wage hike for the midfielder in order to secure his signature.

On the other hand, the pandemic has hit football very hard. Apart from people losing their jobs and taking a major pay-cuts, the gross value of clubs has also decreased. The revenues have hit rock-bottom because of no ticket sales and the players’ value has depreciated by at least 10%, according to reports.

According to MEN, Jack Grealish’s transfer value has dropped significantly and it presents an opportunity for English Premier League giants to seal the player for a fee of around £27.5m. Should Villa get relegated, it would be easier for the Red Devils to snap up the player.

Apart from Manchester United being benefitted by the move, Grealish would also be highly benefitted from the transfer. Despite Grealish being the best performer for Villa Park-based outfit, he is the only player who has shown consistency for his side. A move to Manchester United can help the player to not only improve his game but it can also help him prove the consistency at a higher level.

The second major benefit for Grealish would be European football. The player has an opportunity to choose either European football or Championship football. It is not an arduous task for any footballer to choose between the aforementioned options. Though Jack Grealish has been a Villa supporter since childhood, it is a no brainer that passion and profession are two unique aspects of football.

Moreover, Jack Grealish can win the titles and silverware if he dons the Manchester United kit. Aston Villa have secured no trophy in the past 24 years.

A move to Old Trafford will not only help Grealish increase his chances to win titles but also present an opportunity for Solskjaer to build a team around him, Bruno Fernandes and Paul Pogba which can function at the higher levels.

To conclude, there is every possibility that Grealish can move to United in the upcoming summer transfer window. It will be Ole’s call to figure out his midfield.