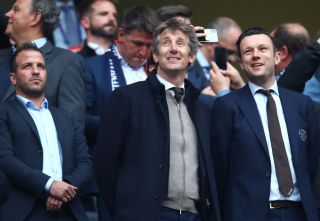 Ever since last summer Ajax and Netherlands midfielder Donny van de Beek has been linked with a move abroad to a bigger club, and now club CEO Edwin van der Sar has named the Red Devils and Real Madrid as potential suitors.

Van de Beek looks like the next player to leave Johan Cruyff Arena, with Hakim Ziyech already having an agreement in place to join Premier League outfit Chelsea. He’s been at the club since 2008 as a youth player, and he’ll remember watching the Red Devils win the Champions League against Chelsea that year, with Cristiano Ronaldo and Wayne Rooney ruling Europe in Red.

Having just turned 23 he’s at just the right age for big clubs to make a move for a developing midfielder with lots of experience.

A move for Van de Beek would be a surprise if Paul Pogba is set to stay at United, but I guess there’s still some uncertainty about that and Ole Gunnar Solskjaer will need to have deals in place if the Frenchman finds a new club.

That does seem doubtful, mind. Reports suggest Madrid will struggle to pay for Van de Beek so they’re not going to be able to afford Pogba.