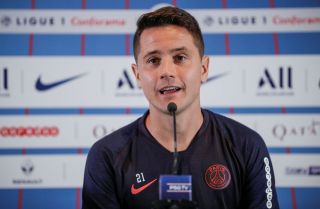 Former Manchester United midfielder Ander Herrera has opened up on how disagreements with the club over the extension of his contract left him feeling sad.

I know United fans were very fond of Herrera, so you might want to grab yourself a tissue.

When asked about why his contract wasn’t extended, Herrera told The Athletic: “It was not about money. It was not about the duration of the contract offer. In my opinion, I waited too long (for an offer) and deserved more attention from the club.

“I was a player that gave everything. I never complained. I never went to the media to complain about anything.

“I never put a bad face to any manager, to any member of the board, and they waited until I had five or six months left on my contract. That’s why I had some disagreements with them.

“I thought they were going to come two years before my contract finished, like most other clubs do. I expected them to come to sign a new contract after my club Player of the Year award in 2017 but they waited until I had six months left on my contract.

“I just felt sad. But, I repeat, and I really want you to put this so clear in this interview — that it is part of football, part of life.”

Although he was a favourite among fans, I didn’t lose any sleep over Herrera’s departure. It was annoying to see him join PSG on a Bosman and we can hardly fault him on his reasons for leaving the club.

He did work tremendously hard whenever he wore the red shirt and he wasn’t shy of theatrics to rile up opposing players, but when you see the difference a signing like Bruno Fernandes makes it certainly softens the blow.

The midfield is still a work in progress without Herrera, however, we’ve got Fred playing much better and Scott McTominay has become a huge influence in the dressing room.

But when you think back to Herrera’s days at Old Trafford it is his performances against Chelsea that will always stand out as some of his best. These displays would see him completely man-mark former Blues star Eden Hazard out of the game!

One match in 2017 saw Herrera score and assist in a 2-0 win over Antonio Conte’s Chelsea and Hazard was as quiet as a mouse. He has now revealed it was part of ex-United boss José Mourinho’s gamelan to nullify the Belgian winger.

“Jose and I both knew Hazard was the best player, by far, in the Premier League at the time, so if we wanted to win that game, we needed him not to touch the ball, or at least as little as possible.

“That’s what we agreed. I said, ‘Jose, I am ready if you need me to man-mark him, to follow him everywhere. If he wants to go to the bathroom, I will go with him because I want to win the game’.

“The most important thing in football is that my team wins, because then I go to sleep happy.

“It does not matter what you have to do, as long as you respect the rules and don’t do anything illegal.”