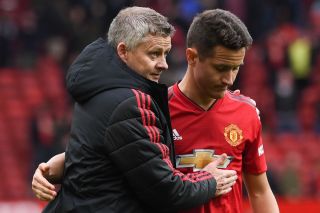 Ander Herrera is confident that Manchester United are close to challenging for the Premier League title, and has named three players that could inspire them to glory.

Ole Gunnar Solskjaer is slowly creating reason for cautious optimism at Old Trafford with positive recruitment and signs that he is implementing his own identity.

The Reds are hoping to continue their impressive 11-game unbeaten run when the Premier League resumes next weekend, with a top four finish the main priority.

But fans still only have to glance at the table and see the 37 point gap with bitterest rivals Liverpool with nine games remaining to realise that there is still plenty of work to be done.

Ex-United midfielder Herrera, now at PSG, believes consistency from the club’s biggest talents will be key in Solskjaer’s revolution.

The Spaniard believes Anthony Martial, Marcus Rashford and Paul Pogba can become three of the best players in the world.

“They have the quality to be among the top 10 in the world,” he said in a wide-ranging interview with The Athletic.

“Why do we admire Lionel Messi or Cristiano Ronaldo, or Eden Hazard, who I also think is one of the best in the world? We admire them because they keep that form for a long time.

“If they do it, they will become… maybe not Messi or Cristiano, because they are unique in the history of football… but they can be top five or top 10, but they have to do it for a long time and keep it up.

“It is the same for Paul. Rashford is on his way to doing it. And Paul can be the best midfielder in the world if he keeps playing those games where we are all amazed by him.

“But to keep it at that level is the most difficult thing in football. To keep at it it Sunday-Wednesday-Saturday, every time. If those three can do that, Manchester United will win the Premier League soon, for sure.”

Martial and Rashford were both having two of their best seasons at the club and Herrera is spot on that they must replicate top performances week-in week-out if the club are to mount a serious title challenge.

Meanwhile, we hope Pogba can create a formidable midfield partnership with new signing Bruno Fernandes as the pair can make the Reds a far more destructive force going forward.

But successful recruitment is still important and Solskjaer needs to be backed financially regardless of the ongoing uncertainty this summer so he can accelerate his rebuild with several key signings.