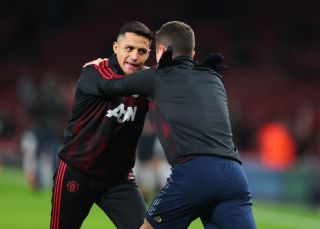 Ander Herrera has no answer for Alexis Sanchez’s dramatic decline at Manchester United.

Sanchez moved to Old Trafford under Jose Mourinho in January 2018 in a swap deal with Henrikh Mkhitaryan.

The Chilean forward was largely expected to join Manchester City in the same transfer window but United saw an opportunity and stole a march on their rivals.

The transfer ignited plenty of excitement within the fanbase, with United supporters believing the club had secured one of the best attacking talents in the Premier League.

But Sanchez’s fall from grace since the move has been quite staggering, with the forward managing just 5 goals for the Reds in 45 appearances.

He has never settled at Old Trafford and was sent out on loan at Inter Milan this season but has failed to establish himself under Antonio Conte due to injury problems.

Ex-United teammate Herrera, now at PSG, is as confused as the rest of us why Sanchez’s United career simply hasn’t worked out so far.

“Sometimes, in football, there is no explanation for every single thing that happens,” he said in an interview with the Athletic.

“Alexis is one of them. He came from Arsenal. He used to win games by himself for Arsenal.

“I remember watching him because Arsenal were our rivals for titles and the top four. I saw them losing games 2-0 and Alexis would score two and they’d win the game. He’d score the winning goal.

“It shows football sometimes has no explanation. How can a player, who one month before, two months before, is the best player by far in a big team like Arsenal… then he comes to United and he doesn’t perform? I have no explanation.”

Sanchez is set to remain at Inter for the remainder of the Serie A season which resumes this month, and he could be given the chance to resurrect his career.

However, for now, his long-term future is unclear and there is every chance he will return to United ahead of the start of the next campaign.