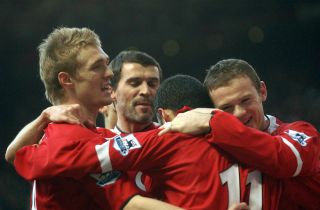 Roy Keane’s infamous MUTV interview in 2005 has popped up in the headlines again.

Wayne Rooney has rather interestingly defended his former Manchester United captain over an interview that ultimately led to the end of the Corkman’s United career.

He criticised his own team-mates including Darren Fletcher, Kieran Richardson and Rio Ferdinand, but then-manager Sir Alex Ferguson said Keane “absolutely overstepped his mark”, as per the Telegraph.

When you speak to former United players they will tell you Keane set the standards at United. He expected the best and only the best.

But his fallout is his biggest — let’s not forget Saipan — because his relationship with Ferguson has never recovered.

Rooney has revealed he agreed with what Keane said during that post-match interview which came after a 4-1 defeat to Middlesborough: “I was at United when he gave his infamous MUTV interview but disagree with how it’s portrayed,” Rooney wrote in his Sunday Times column. “Roy was supposedly too critical of his team-mates but I’ve watched the video and there’s nothing wrong with it at all.

Keane being the one who set the standards at United is, of course, backed up against by Rooney, who also revealed that the former Republic of Ireland international was the person he most wanted to impress on his first day after joining as a youngster from Everton.

“Now Roy Keane was vocal. He had an aura. I remember my first United training session thinking, ‘I need to impress him.’ Not the manager. Him,” Rooney added.